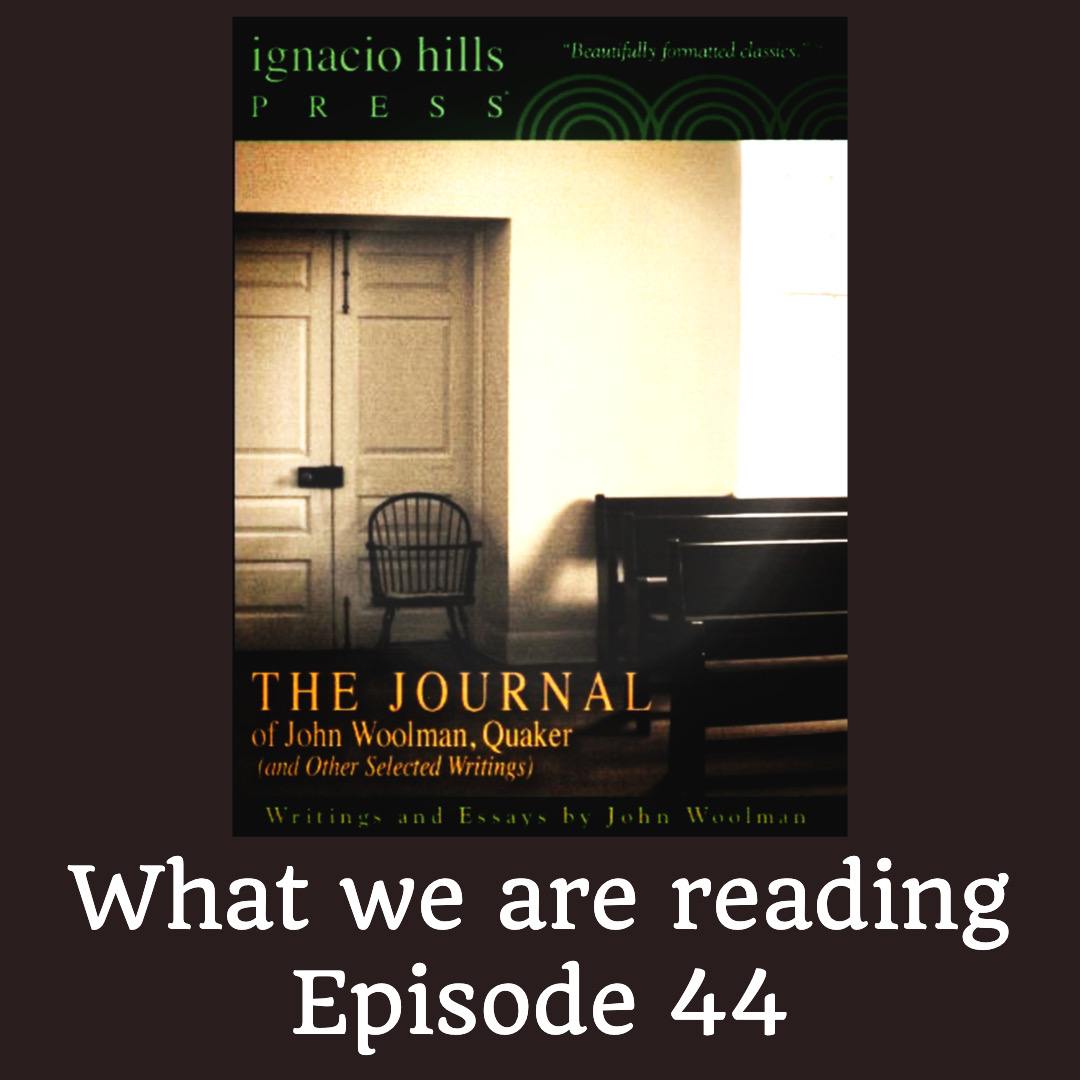 What we are reading – Episode 44

What we are reading, episode 44

This week I bring you some thoughts from an interesting book – the journal of an 18th century Quaker, John Woolman.

I forget how I heard about the book, other than it was recommended in some other reading I’ve been doing. The issue that drew me to it was that he wrote about slavery. I thought it might be insightful to be exposed to the thinking of someone who developed a settled opposition to the slave trade at a time before it was a mainstream movement.

If I had know him, I doubt I would have liked him. But I’m sure I would have admired him. We need people like that in every community. As an example of his independent thinking, take his convictions regarding the purchase of dyes. The editor to this edition writes:

“It was difficult to disregard a man who wore conspicuous white clothes rather than use dyes which had to be produced by slave labor. John Woolman was the gentle conscience of Quakerism.” From the introduction

For this review, I will pick out two issues which spoke to me. The first is his attitude towards slavery, and the second is his approach to confronting his fellow Quakers on that issue.

It is clear that he reflected carefully on his feelings and thinking all through his adult life. In particular on the issue of slavery. He paid careful attention to his feelings, his spirit and his conscience. Consider this quote from the second chapter of his journal:

“When I ate, drank, and lodged free-cost with people who lived in ease on the hard labor of their slaves I felt uneasy; and as my mind was inward to the Lord, I found this uneasiness return upon me, at times, through the whole visit.” Chapter 2

His concern was not simply for himself, but for the future. Of those who embraced the ownership of slaves he wrote this:

“…though now many willingly run into it, yet in future the consequence will be grievous to posterity.” Chapter 2

He has been proven right on this count time and time again.

Of the many motivations for the ownership of slaves, he observed that greed was one of them:

“The love of ease and gain are the motives in general of keeping slaves, and men are wont to take hold of weak arguments to support a cause which is unreasonable.” Chapter 4

He was deeply troubled by the acquisition of luxury for the tiny minority produced at the expense of slaves:

“These are the people by whose labor the other inhabitants are in a great measure supported, and many of them in the luxuries of life. These are the people who have made no agreement to serve us, and who have not forfeited their liberty that we know of. These are the souls for whom Christ died, and for our conduct towards them we must answer before Him who is no respecter of persons.” Chapter 4

What impressed me about his perspective is that it was the minority view at the time. He was blazing a trail for others who came after him. There was no abolitionist movement to speak of where he lived. His convictions came from his own heart, mind and reading of scripture.

2. On speaking truth to one’s fellow-believers

John Woolman was realistic about the challenges he faced in attempting to convince his fellow-believing Quaker slaveowners of changing their perspective and practices. However, he was determined to pursue what he saw as his duty:

“Deep-rooted customs, though wrong, are not easily altered; but it is the duty of all to be firm in that which they certainly know is right for them.” Chapter 3.

He was also clear that he could not please everyone. He certainly made some enemies along the way:

“I saw at this time that if I was honest in declaring that which truth opened in me, I could not please all men; and I labored to be content in the way of my duty, however disagreeable to my own inclination.” Chapter 3.

“I find that to be a fool as to worldly wisdom, and to commit my cause to God, not fearing to offend men, who take offence at the simplicity of truth, is the only way to remain unmoved at the sentiments of others.” Chapter 3

John saw speaking the truth in love as part of genuine friendship and brotherhood. He was concerned for true unity and the prayer of Jesus in John 17:

“To see the failings of our friends, and think hard of them without opening that which we ought to open, and still carry a face of friendship, tends to undermine the foundation of true unity.” Chapter 7

I found my spirit being refreshed not only by his courage, but also by the deep and lengthy periods of prayer and reflection he engaged in before talking to his fellow believers. It was not uncommon for him to approach someone, decide it was not the right time, and go away for a day, a week, or even several months before coming back when he believed the Spirit had set the right time for the conversation.

Whenever he had a difficult decision to make, he spent considerable time in prayer – often all night.

There is much to admire and learn in these journals. However, I’m not sure I want to recommend it to you. Mostly because the language is very 18th century and obscure at times. It’s a hard slog. Personally, I’m glad I made the effort. You will have to decide for yourself if it could be beneficial for you.

“Jesus and the Law in Matthew” | Class 1 | Chris Birtles

Quiet Time Coaching: Episode 100. “The Value of ‘Constant Use'”