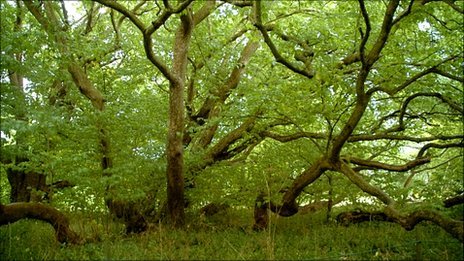 I saw this article on the BBC web site (http://www.bbc.co.uk/news/uk-england-wiltshire-13682775) about the UK’s ‘vastest’ tree (is there such a word as ‘vastest’?). It spreads over an area the size of a football pitch, and is more than 250 years old. Now I like trees, but unfortunately this cannot help but remind me of the ‘spreading trees’ of the Bible – and their reputation was significantly less illustrious than this Oriental Plane in Wiltshire.
You see, in Bible times the spreading trees were on the ‘high places’. And what occurred at these locations? Let’s do a history lesson. First, God warned the Israelites about them,

“Destroy completely all the places on the high mountains and on the hills and under every spreading tree where the nations you are dispossessing worship their gods. Break down their altars, smash their sacred stones and burn their Asherah poles in the fire; cut down the idols of their gods and wipe out their names from those places. You must not worship the LORD your God in their way” (Deuteronomy 12:1–4 NIV)

He gave them clear instructions because he knew the temptation to fit in, to compromise and to accommodate that which should be repudiated. How successful was this warning? Judging by the number of accounts describing the Israelites involving themselves under the spreading trees it does not look like they paid much heed to God’s warnings. Witness Judah,

“Judah did evil in the eyes of the LORD. By the sins they committed they stirred up his jealous anger more than their fathers had done. They also set up for themselves high places, sacred stones and Asherah poles on every high hill and under every spreading tree. There were even male shrine prostitutes in the land; the people engaged in all the detestable practices of the nations the LORD had driven out before the Israelites.” (1 Kings 14:22–24 NIV)

Male prostitution. It is hard to see how they could have got further from God’s plan for them. Hang on, it did get worse – with Ahaz,

“He walked in the ways of the kings of Israel and even sacrificed his son in the fire, following the detestable ways of the nations the LORD had driven out before the Israelites. He offered sacrifices and burned incense at the high places, on the hilltops and under every spreading tree.” (2 Kings 16:2–4 NIV)

Child sacrifice. The nadir of Israel’s relationship with Yahweh. So what did God do? Wipe His people out? No, He sent his prophets like Isaiah to call them to account and plead with them to repent,

“You burn with lust among the oaks and under every spreading tree; you sacrifice your children in the ravines and under the overhanging crags.” (Isaiah 57:5 NIV)

And did He get the response He hoped and longed for? Well I think we know they answer to that. In general the response was just as Stephen described hundreds of years later,

“Was there ever a prophet your fathers did not persecute? They even killed those who predicted the coming of the Righteous One. And now you have betrayed and murdered him—” (Acts 7:52 NIV)

Why, after all the teaching, the evidence of God’s provision, power and love, the many messengers and impressive patience of the LORD did His people not repent? Why did they not destroy their high places and turn the spreading trees into fuel for the fire? One cannot see into all the hearts, but I imagine that they came to believe the lie we all want to believe – that we can have the LORD and the WORLD. After all, the reasoning goes, God is by nature forgiving. But we confuse forgiving with tolerant. God is entirely ‘other’ and so are His people meant to be,

“Do not love the world or anything in the world. If anyone loves the world, the love of the Father is not in him.” (1 John 2:15 NIV)

We are called to spread the love of God, not indulge ourselves under modern ‘spreading trees’. Do we have ‘spreading trees’? Where are the places we go for fulfilment, for meaning, for value, for identity, for worth that are shabby substitutes for the real thing that only God can provide?
I hope the Wiltshire tree lives and spreads for a lot longer, but let us be sober about the spread of the World into our hearts. God’s word can awaken us to the danger of the world, and repentance can enliven us to devotion to our God.