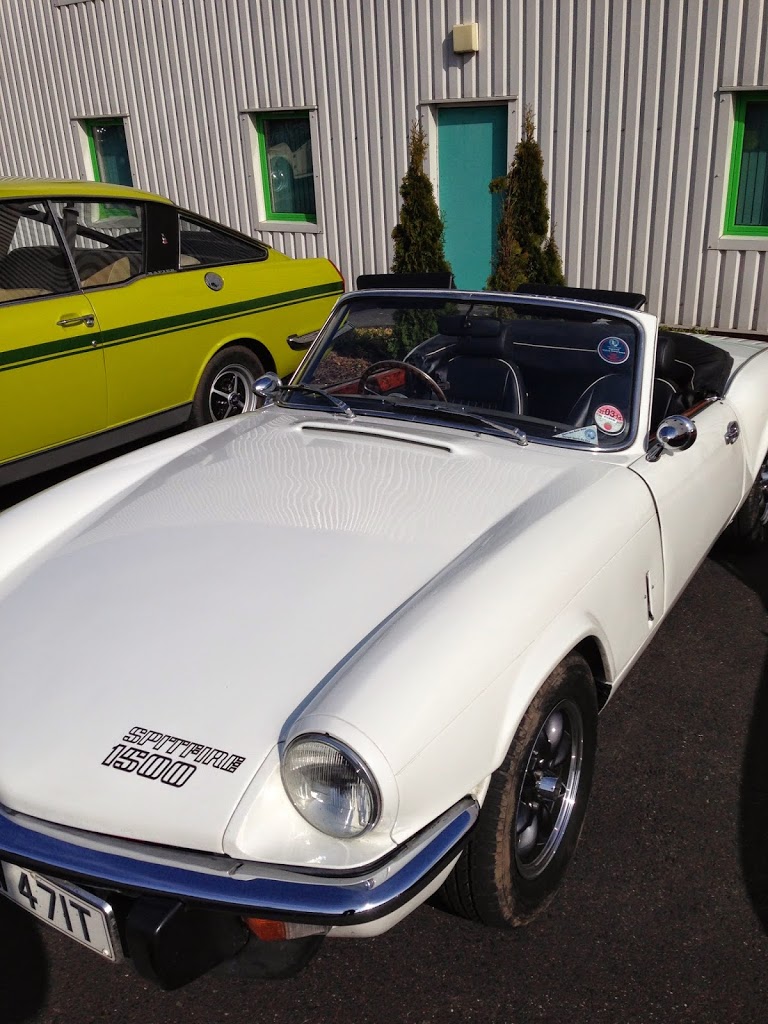 Today’s post harks back to my day amongst classic cars and their owners last Saturday. Why did I go along to the Heritage centre? Well, my interest in older cars is practical, not theoretical.

You see, I currently run a 1991 VW Golf which I bought for £50 five years ago. It, like its owner, is not getting any younger. When it passes on to that great garage in the sky I intend to replace it with a classic car (pre-1974). Not having owned a classic before I have a number of questions. One, and perhaps the most important, being “Will it be a money-pit?”

I spoke to an owner on the day and asked him if buying a classic car was a fast-track to financial ruin. He assured me he had bought his for only £2,500. A “bargain” he said. Sounds reasonable, I thought. Then he listed all the improvements he had made: overdrive, uprated shocks, polyurethane bushes all round, new stereo & speakers, better brakes …. the list went on. A little later I overheard him confessing that he had spent around £8,000 on the car – making it a total outlay of £10,500.

Now, irrespective of whether you think that spending £10,500 on a classic car is advisable (and it’s an opinion matter), the point is that he did not spend £2,500 as he first told me.

Humankind’s propensity for self-deception never spoke louder. I shouldn’t be too harsh on the car owner – after all, I and most of us have been less than honest with ourselves when we’re dealing with something about which we are passionate. Losing objectivity about a car has consequences, but at least they are temporary. What about spiritual matters? How do we avoid spiritual self-deception? Here is one key tip.

We need a Nathan.

Remember the story in 2 Samuel 11? David should have been on the battlefield, but instead he was in Bathsheba’s bed. The story is frightful, but, at least for a while, has no resolution – only the ominous words at the end of the chapter, “But the thing David had done displeased the LORD.” (2 Samuel 11:27 NIV11)

In time the prophet Nathan is sent to David.  This courageous man of God tells a parable about a wealthy man who took advantage of a poorer man. David doesn’t realise it is a parable, but takes the story literally. He reacts in this way: “David burned with anger against the man and said to Nathan, “As surely as the LORD lives, the man who did this must die! He must pay for that lamb four times over, because he did such a thing and had no pity.”” (2 Samuel 12:5–6 NIV11)

Nathan reveals the truth, ““You are the man! This is what the LORD, the God of Israel, says: ‘I anointed you king over Israel, and I delivered you from the hand of Saul. I gave your master’s house to you, and your master’s wives into your arms. I gave you all Israel and Judah. And if all this had been too little, I would have given you even more. Why did you despise the word of the LORD by doing what is evil in his eyes? You struck down Uriah the Hittite with the sword and took his wife to be your own. You killed him with the sword of the Ammonites. Now, therefore, the sword will never depart from your house, because you despised me and took the wife of Uriah the Hittite to be your own.’” (2 Samuel 12:7–10 NIV11)

There is more – go and have a read of 1 Samuel 12 for more detail. But for our purposes today, it is important to note the vital part Nathan played in saving David from self-deception. The King had no intention of facing his sin. Nathan had other ideas. Do you have someone in your life courageous enough to tell you the truth? Avoiding self-deception is only possible if we’re willing to listen to others with a different perception.

Please leave a comment in this post to help us avoid spiritual self-deception. What works for you?

I’m not sure if my classic car owning friend was aware of his classic car blindness to reality. I wonder about his wife? Nevertheless, I hope to have a Nathan around when I need him.