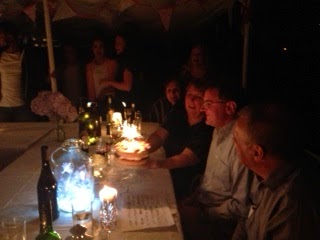 It’s not often I drive four hours and don’t feel sleepy. Still less often do I sing in the car. With the windows open. And the sunroof.

But today was different. Why? Because I’d been refreshed by friendship. Me and Archie have know each other for 30 years, and last night we celebrated his 50th birthday. Few people have packed as much impact into their lives as him this last half-century.
Friends and family drank toasts to a man we all wanted to be with as he reached the milestone of 50 years on this planet. Why were we there? Because Archie has a rare gift – that of making us feel special. Our friendship has survived despite (or perhaps because) of differences and disappointments, just as much as shared joys and victories. Perhaps I shouldn’t mention the time he fell asleep while we were talking, and the fact that he’s a Spurs supporter – so I won’t.
But I will mention the time he dashed to the hospital where my son was in danger of dying of meningococcal septicaemia. We didn’t know if he would live. Arch took me to the hospital chapel and we prayed together. He prayed with just as much passion as I did. His concern for my son touched the same levels as my own. Here is a man who feels deeply for people.
This is a Christ-like quality. Archie has cooperated with the Holy Spirit to live out the heart of Jesus. It reminds me of the scene around the tomb of Lazarus,
“When Jesus saw her weeping, and the Jews who had come along with her also weeping, he was deeply moved in spirit and troubled.  “Where have you laid him?” he asked. “Come and see, Lord,” they replied. Jesus wept.” (John 11:33–35 NIV11)
“Deeply moved in spirit” – that’s what I saw in Archie, and thus I learned something about Jesus.
Now you know why I drove all the way to Liverpool. And you also know why I was singing in the car on the way back. The journey home from Liverpool today was long, but it was not dreary. I’d been reminded what true friendship is all about. I’d been refreshed in my spirit by seeing Christ-likeness.
“One who has unreliable friends soon comes to ruin, but there is a friend who sticks closer than a brother.” (Proverbs 18:24 NIV11)
Thank you, Archie, for being my friend. I hope I can be that kind of friend to others.
God bless,
Malcolm