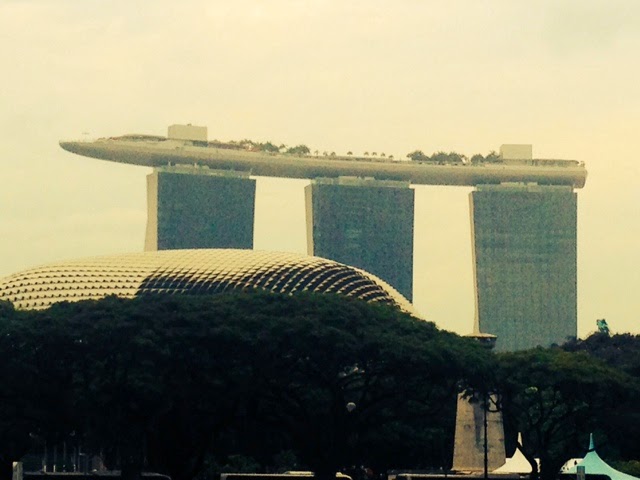 Is it a bird? Is it a plane? No, it’s a hotel!  One of the stranger sights in Singapore is this boat-like structure. Locally known as the “Noah’s Ark Hotel” it’s a 5 star hotel in the sky shaped like an ocean-going cruise liner. There it sits on a concrete, steel and glass Mount Ararat.
On my first morning in Singapore I walked out of the hotel for a prayer walk. Before I could get going, I had to process the sight of the ship in the sky. I found it rather distracting, to be honest. What was it saying to me?
Well, the conference I was attending had a theme – “build“. Amongst many builders in the Bible we have Noah. He built an ark. Why? Because God told him, “make yourself an ark of cypress wood” (Genesis 6:14 NIV11). And the purpose? “I will establish my covenant with you, and you will enter the ark—you and your sons and your wife and your sons’ wives with you” (Genesis 6:18 NIV11). God wanted a relationship with Noah, and He wanted Noah’s family to be safe.
Now, I’ve not seen the recent film “Noah”, and I have no comment on its theological accuracy here (which I believe to be highly suspect), nor do I have a review to share (check out Mark Kermode’s review on one of my favourite podcasts, where I believe the word used most frequently to describe the film was “bonkers”), but I do believe that the theme of building something to save family is one to which we can all relate.
I watched four films on the flight home from Singapore (a new record for me), one of which was “Godzilla“. Yes, I know, it’s a somewhat stupid monster movie (my defense is that I was very tired). I cried buckets towards the end of the film. Why? Well, treading carefully so as not to reveal crucial plot points, what I will say is that the theme of saving family is a strong emphasis.
One of the most important themes of the conference was that of building well. What we pass on to the next generation needs to be well constructed so that they can take the building higher. In 1 Cor 3.10ff Paul said that he “laid a foundation as a wise builder”. Some of that wisdom was that he knew the time would come when he would find “someone else .. building on it”. His response was to call others to “build with care”.  What does it mean to build with care? Well, that’s a post for another occasion, but for now, perhaps the lesson for me is to heed the lessons of Noah, which I would summarise as: build what God tells me to build, even if looks stupid to the rest of humanity, seems as if it has no meaningful purpose, and takes 100 years to finish.
Where’s my hammer?
I hope you have a wonderful week, and God bless.
Malcolm